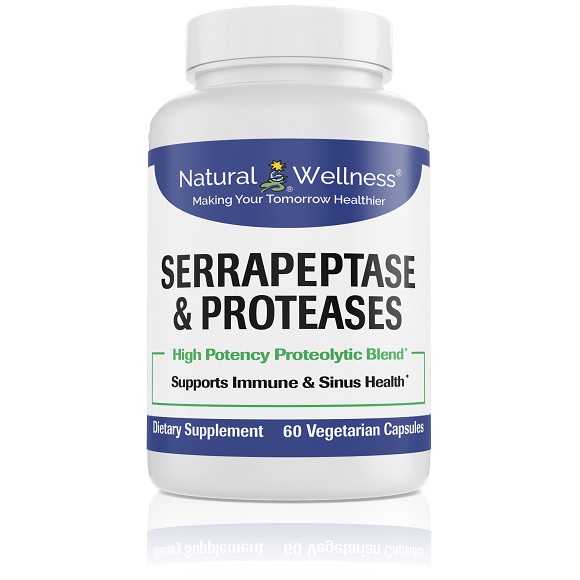 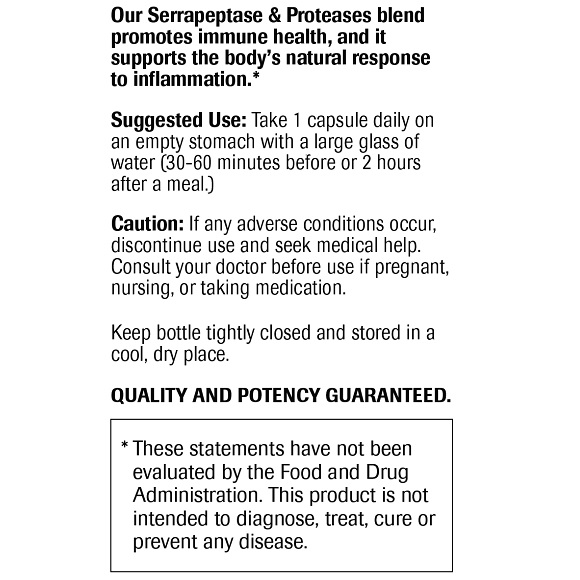 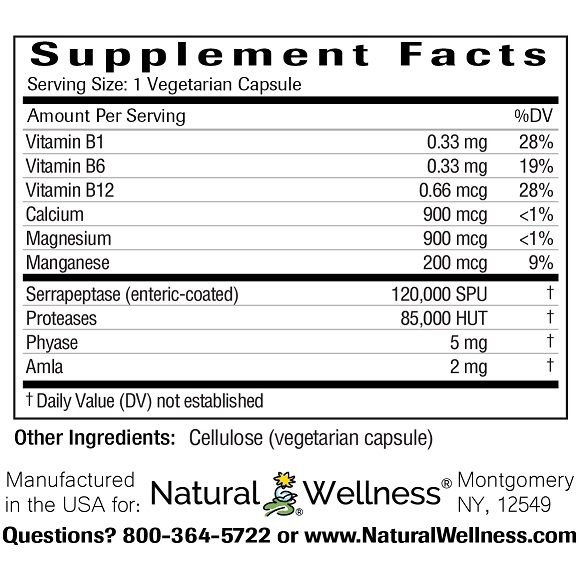 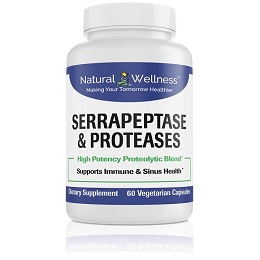 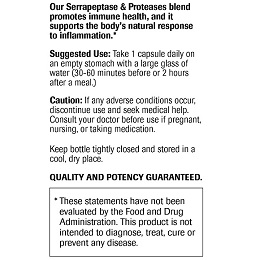 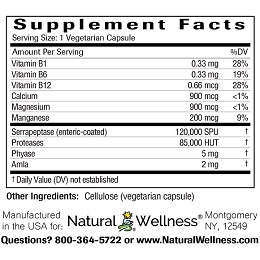 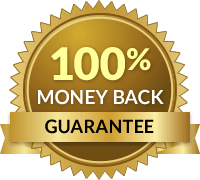 Try Serrapeptase & Proteases risk-free for 90 days. If you don't love it, simply send it back for a full refund. No questions asked - For first time orders, we'll even pay for the return shipping.

Serrapeptase & Proteases is a powerful blend of proteolytic enzymes designed to support your body's natural inflammatory response, as well as promote your respiratory and immune health.

Inflammation is our body’s natural response to injury and infection. It is a complex biological process to ward off invading pathogens and initiate the healing process. For example, inflammation may arise if you have been infected by a virus or parasite, which has been associated with reduced liver function.

Acute inflammation is short-term and characterized by swelling, redness, heat, pain, and loss of function, signs which typically subside when the underlying problem goes away. Chronic inflammation, on the other hand, may be the continuation of acute inflammation or a prolonged low-grade form of inflammation, and it often goes unnoticed until manifesting in symptoms of a disease.

As we age, we often lose the ability to recover from injury as quickly as we did at an earlier age. The minor injuries our body encounters can lead to more serious issues if inflammation is not effectively managed. Unregulated inflammatory responses cause havoc on our bodies resulting in pain and discomfort. Chronic inflammation can lead to everything from diabetes to arthritis to cardiovascular and respiratory conditions.

Fibrin is an insoluble protein our body produces in response to bleeding or inflammation. Under normal circumstances, excess fibrin in connective tissue is broken down by proteolytic enzymes and removed. When this process is compromised, excess fibrous material accumulates in the tissue and leads to fibrotic conditions such as arthritis and cardiovascular issues. Excess fibrin is also associated with scar tissue buildup, including on the liver. Additional scar tissue on an already compromised liver could decrease function even further.

Serrapeptase & Proteases contains proteolytic enzymes, rich with its namesake serrapeptase, which support the body’s natural response to inflammation. Its proposed mode of action supports the body’s natural mechanism for dissolving fibrin and preventing excess amounts in the body.

The enteric-coating we use on our serrapeptase ensures the enzyme reaches the small intestine to be absorbed into the bloodstream, and work systemically. These enteric coated enzymes are designed to withstand the different pH levels of the human digestive tract, ensuring proper delivery of the enzymes into the bloodstream.

Serrapeptase & Proteases is an efficacious systemic enzyme formula, and one of the most potent on the market for supporting your health.

Be the first to review this product.

Each bottle of Serrapeptase & Proteases contains 60 vegetarian capsules. As a dietary supplement, take 1 capsule daily on an empty stomach with a large glass of water (30-60 minutes before or 2 hours after a meal).

Consult your medical professional prior pregnant, breastfeeding, or taking medication. discontinue use and seek medical healp if any adverse conditions occur. 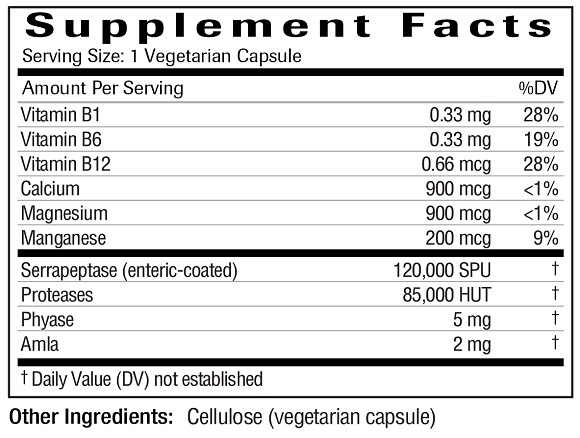 Natural Wellness® supplements are recommended by healthcare professionals and are sold around the world. When developing, formulating and producing  supplements, Natural Wellness® focuses on science, quality, and proven performance. Ingredients used are of the highest quality, and all supplements are manufactured in the USA under strict current Good Manufacturing Practice (cGMP) regulations ensuring all safety and quality standards are met.

All products are guaranteed to give you 100% satisfaction in every way. If you are not completely satisfied with a product you purchased for any reason, return it to Natural Wellness® within 90 days of purchase, and you will be issued a complete refund of the purchase price (less shipping and handling).

For any nutritional product you try for the first time, in addition to refunding you the purchase price, you will be refunded your shipping and handling, AND Natural Wellness® will even pay for the return shipping. Natural Wellness® truly takes the risk out of trying something new.

This is just one component of Natural Wellness' Super 7 Satisfaction Guarantee - which provides you with a risk-free, 100% money-back guarantee - along with the finest quality, service and security available online today.

Each ingredient is tested before production begins and the finished product is tested upon completion to ensure what is stated on your product label matches what's in each and every serving.