Preventing tick bites without toxic chemicals is a win-win for everyone – especially for those who have chronic liver disease. 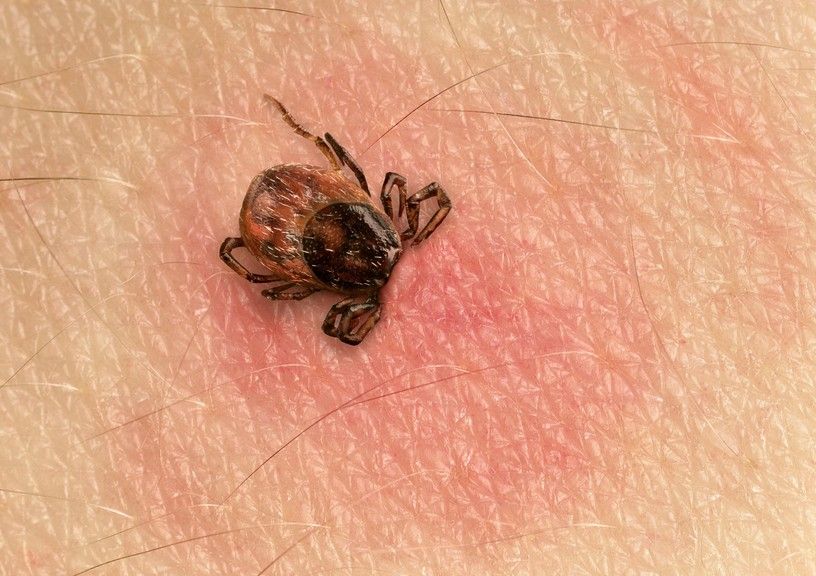 Unless we are in the dead of winter, tick bites invoke anxiety in areas of the country where Lyme disease is prevalent. Lest they completely avoid the beautiful outdoors, folks in the northeast and upper midwest are accustomed to scanning their bodies for ticks to prevent Lyme disease. For those with a liver condition, ticks pose a double risk; Lyme disease (a tick-borne illness) and the chemicals in common tick repellents can both cause liver inflammation and damage.

The Lyme disease bacterium, Borrelia burgdorferi, is spread through the bite of infected ticks. The blacklegged tick (or deer tick) spreads the disease in the northeastern, mid-Atlantic, and north-central United States and the western-blacklegged tick spreads the disease on the Pacific Coast. Ranging in size from a sesame seed to a poppy seed, these ticks can be very small and often escape notice.

Symptoms of Lyme disease can be vague, and may progress to serious illness if not addressed swiftly. The initial stage of Lyme disease typically involves rash and flu-like symptoms, but some people do not notice anything out of the ordinary. If untreated, Lyme can affect various systems of the body, such as the nervous system, the heart and the joints. Some of the more common complications include stiff neck, severe headaches, joint pain and swelling, arthritis, facial palsy, heart palpitations, memory problems, chronic pain, Lyme carditis and other neurological deficits.

Addressed with antibiotics in the early stages, those with Lyme disease usually recover quickly and completely. However, not everyone is lucky enough to easily get rid of Lyme. Some who address it early and some who have progressed to more advanced stages of the illness may require prolonged antibiotic therapy to suppress Borrelia burgdorferi.

Lyme usually targets the nervous system, heart and the joints – but all parts of the body are connected. Thus, it is no surprise that researchers have found persistent infection with Lyme disease may cause inflammation of the liver – otherwise known as hepatitis. In a 2003 article published in Hepatology Journal, researchers studied people who had been bitten by a tick. They found:

Experts believe that when Lyme disease progresses past the initial stage, the bacteria pass from the blood into the tissues. When this occurs, the disease becomes chronic – and the liver becomes vulnerable. Because those with a compromised liver are particularly susceptible to any lingering toxin or pathogen, chronic Lyme poses an additional challenge to liver disease sufferers.

When living in an area where Lyme disease is prevalent, tick prevention measures are vital. The CDC (U.S. Centers for Disease Control and Prevention) suggest the following:

Unfortunately, the chemicals commonly used in tick repellent products can be harmful to the liver. Although occasional application of DEET or Permethrin is likely no big deal, those who are frequently exposed to ticks and must use tick repellent regularly have a much greater accumulation of these chemicals in their body. In addition, those who already have a compromised liver are much more vulnerable to toxic chemicals. Both DEET and Permethrin are accompanied by risk:

The basics of tick bite prevention remain unchanged; avoiding contact with ticks, doing routine tick checks after a person, pet or gear has been in the outdoors, swift tick removal and using a high heat dryer cycle to kill ticks in clothing. Nonetheless, tick repellents containing toxic chemicals are less than desirable for those with a liver condition.

Fortunately, there is an effective alternative to tick repellents that is not toxic to the liver. A combination of potent and carefully selected essential oils has the potential to kill ticks – preventing them from biting a human. Ticks produce a neurotransmitter called octopamine that can be blocked with non-toxic oils. A formula known as NeuroRX™ is comprised of essential oils that effectively blocks octopamine, which shuts down the tick’s central nervous system, killing it instantly.

This combo of essential oils does not stress the liver and is not only a better tick repellant choice for those with chronic liver disease but also a great choice for protecting yourself against other insects such as mosquitoes, fleas and bedbugs.

Ticks are problematic for everyone, but especially those with an existing liver ailment. The chemicals commonly used for repelling ticks can add to the liver’s toxin load, increasing the likelihood of inflammation in an already irritated organ. This is because those with liver disease are more prone to the stress of chemical toxicity than those with healthy livers. In addition, a tick bite that progresses to chronic Lyme disease can lead to inflammation of the liver – adding insult to injury for those already trying to manage a liver problem.

There is no guaranteed way to stay tick-free and avoid Lyme disease. Nonetheless, those who live or visit areas where Lyme disease is prevalent are encouraged to practice tick bite prevention in a way that will not add any stress to an already compromised liver.

http://www.cdc.gov/lyme/stats/, Data and Statistics, Retrieved June 7, 2015, US Centers for Disease Control and Prevention, 2015.

http://www.cdc.gov/lyme/stats/, Signs and Symptoms, Retrieved June 7, 2015, US Centers for Disease Control and Prevention, 2015.