New evidence connects glyphosphate, an active ingredient in RoundUp, to liver damage. This demonstrates that modern agricultural practices are now a major factor in our society’s increase in chronic liver disease. 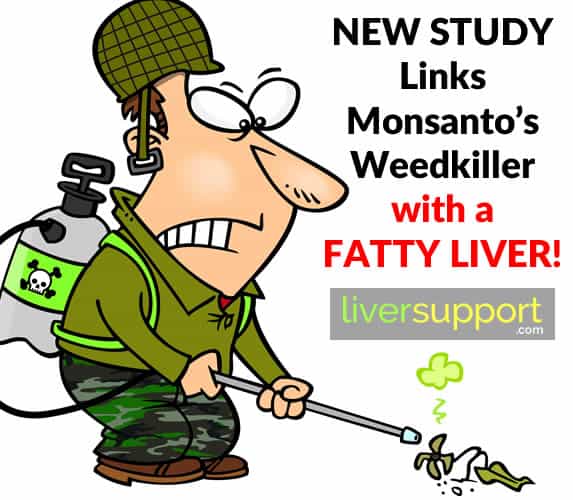 Escalating the call to support liver health, a study published in January 2017 draws a parallel between glyphosphate consumption and fatty liver disease. The new evidence linking this chemical to liver damage highlights modern agricultural practices as a major factor in our society’s increase in chronic liver disease.

Many recognize glyphosphate as the active ingredient in Monsanto’s weedkiller, RoundUp. Despite being around since the mid-70s, we are just beginning to scratch the surface of glyphosphate’s repercussions to human health. There has been some debate as to glyphosphate’s classification as a carcinogen and whether or not it is safe:

Led by Dr. Michael Antoniou at King’s College London, the peer-reviewed study was published in the January 2017 edition of the journal Nature. By administering a very low daily dose of glyphosphate to rats over the course of two years, this study was the first to demonstrate a causative relationship between an environmentally relevant level of RoundUp consumption over the long-term and non-alcoholic fatty liver disease.

Glyphosphate in Our Food

A synthetic amino acid, glyphosphate is the most widely used weedkiller on the planet – and its presence in food for human consumption and animal feed is omnipresent. A harmful practice that fosters glyphosphate existence in our food is pre-harvest treatment. In northern, colder regions farmers must wait for their crops to dry out prior to harvest. Instead of waiting an additional two to three weeks for drying out, farmers frequently spray their plants with glyphosate, killing the crop and accelerating their drying. This is known as desiccating.

Crops that are commonly desiccated with glyphosphate include:

After desiccation, the likelihood of glyphosphate residual is high. Recent testing by the Defra Committee on Pesticide Residues in Food (PRiF) found that almost two-thirds of whole-meal bread sampled contained glyphosate. Testing for glyphosate residue at a U.S. Food and Drug Administration laboratory in Atlanta has found up to 1.67 parts per million (ppm) in certain instant oatmeal cereals and up to 121 nanograms per gram (ng/g) in samples of honey.

Barring growing your own food, it seems hard to avoid glyphosphate food contamination. Those at higher risk for fatty liver disease (individuals who are overweight, obese, or have diabetes, high cholesterol and high triglycerides) are particularly vulnerable to the effects of this weedkiller.

Advocates of shielding your liver from environmental toxins advise supporting the liver with natural substances that:

In addition to eating a nutritious diet, exercising regularly and avoiding as many environmental toxins as possible, combining these five liver support goals helps to combat chemical-induced  liver problems. To reduce the cumulative effect glyphosphate has already taken and will continue to exert on your liver, a comprehensive supplement like Clinical LiverSupport provides all of the suggested liver protection benefits.

Hopefully, the King’s College London study will be a turning point in how the agricultural and health industries consider one another. To be healthy, we need nutritious and chemical-free food. Especially when it comes to non-alcoholic fatty liver disease and steatohepatitis, phasing glyphosphate out of agriculture (especially desiccation) appears to be the next step. Until that happens, please, protect your liver from this popular weedkiller and desiccant.