Learn why changes in the fingernails could be an indicator of a liver problem.

Unless there is an obvious problem, many of us tend to take our physical bodies for granted. This is unfortunate because looking closely at the human body can divulge many clues about that person’s current state of health.

Different kinds of alternative health practitioners are known to analyze a person’s eyes, gait and tongue, but these are not the only windows into a person’s well-being. If not covered up by acrylic nails or polish, fingernail anomalies can reveal several details about a person’s health – including the functionality of his or her liver.

What Are Fingernails Made Of?

Fingernails are not made of living tissue, but they reflect the health of living cells at the nail’s base. Composed of layers of the protein keratin and growing from beneath the base of the nail under the cuticle, fingernails are the accumulation of older cells becoming hard and compacted.

can indicate a problem with the body’s cells, a possible sign of some type of medical condition.

Because fingernail appearance takes time to develop, nail changes that accompany a health condition are rarely the first sign of a problem.

Despite the association between a person’s systemic health and his or her fingernails, there are several reasons that an abnormal nail could be an isolated issue.

Blunt force like slamming a finger in a door can cause white spots or lines on the nail. 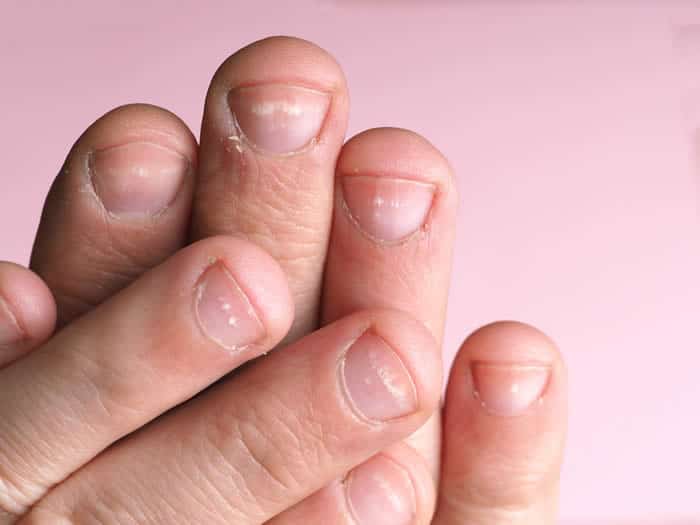 A nail fungus can cause local inflammation or discoloration.

In some cases, a change in the fingernails can be caused by a temporary stressor. For example, a high fever, serious injury or infection can temporary halt nail growth. This is because the body shifts its focus away from the low priority of growing nails due to extra demand in another area.

When the nails start growing again, horizontal lines called Beau’s lines may appear across them. According to The Mayo Clinic, the lines are “indentations that run across the nails.” Showing where the nail growth temporarily stopped, Beau’s lines grow out eventually and are typically harmless.

4 Fingernail Appearances That Could Signal a Liver Problem

While certain nail irregularities might not be associated with any systemic health issues, lasting changes to the nail’s color, texture or shape should be reported to a physician. According to a June 2010 report in the Journal of the European Academy of Dermatology and Venereology, nail changes were frequently observed in people with liver cirrhosis and the liver infections Hepatitis B and Hepatitis C.

For those with liver health concerns, the following fingernail appearances could signal a liver problem:

If any of the nail abnormalities listed above appear and persist, it could be time to have a discussion with a knowledgeable physician.

However, fingernail paleness, lines or odd shapes can be associated with many etiologies other than liver disease. As such, it is important to not panic if any of these nail changes are discovered.

It is true that the fingernails’ appearance can reflect the liver’s health; but, there are also dozens of other valid explanations for changes in their color, shape and texture.

http://www.webmd.com/skin-problems-and-treatments/ss/slideshow-nails-and-health, Slideshow: What Your Nails Say About Your Health, Retrieved August 25, 2012, WebMD, LLC, 2012.