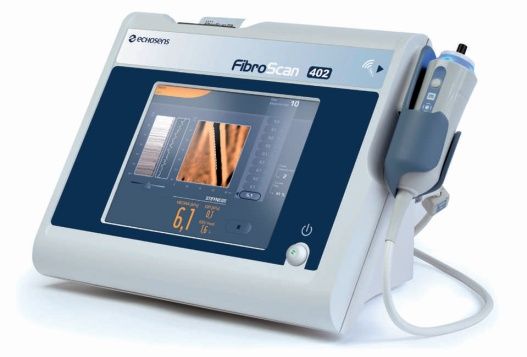 Liver biopsy stood its ground as the gold standard for assessing liver health for decades, but less-invasive options are available. As of 2013, America joined over 70 other countries in approving the use of FibroScan® to determine the presence and extent of liver damage. If you have reason for determining or monitoring liver fibrosis, make sure you know the pros and cons of the FibroScan® test.

A liver biopsy is a diagnostic procedure where a needle is inserted into the liver to obtain a small amount of liver tissue. That sample is then examined under a microscope to determine the presence of and the degree of liver scarring (fibrosis). Although it is used for various other liver ailments, a liver biopsy is especially useful to evaluate patients with viral Hepatitis C or Hepatitis B in staging the disease and determining whether or not the person is a candidate for treatment. Despite its long reign as being the preferred liver diagnostic method, liver biopsy has a long list of disadvantages.

Also called transient elastography, FibroScan® assesses liver stiffness without being invasive. Transient elastography is feasible because an increase in liver scarring increases tissue rigidity. By sending sound waves into the liver causing it to vibrate, the FibroScan® measures the shear wave velocity. This is accomplished by passing a 50-MHz wave into the liver from a small transducer on the end of an ultrasound probe. Although approved by the U.S. Food and Drug Administration (FDA) on April 5, 2013, FibroScan® has been the liver diagnostic tool of choice elsewhere for up to a decade.

Some advantages of FibroScan® include:

However, FibroScan® does have some limitations:

Experts believe that serum biomarker tests and radiologic tests are not mutually exclusive; as many guidelines currently recommend combining the two types of testing. Admittedly, there are a few limitations to FibroScan® testing. However, the cost, time and comfort benefits of this non-invasive liver test are sure to transform the practice of hepatology – an advancement that U.S. clinicians can finally utilize.