Move over raisins – wolfberries are really something to howl about when it comes to liver healthy snacking. 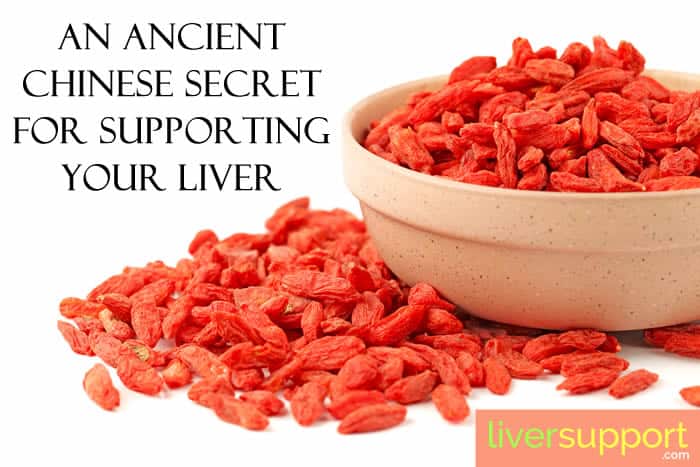 Typically found in dried form in the U.S., wolfberry deserves to be on your healthy-food- for-your-liver radar. Commonly referred to as goji berry or lycium berry, the fruit of Lycium chinensis has been used for centuries both as food and medicine by the Chinese. While most berries contain antioxidants and are good for you, wolfberries have a special characteristic: they also support and protect your liver. As such, those concerned with their liver’s well-being would be wise to snatch these tasty little treats up whenever they are available.

A rangy shrub native to China, goji berry has been used in traditional Chinese medicine (TCM) for more than 2,000 years. Known by TCM practitioners as gou qi zi, its use was first recorded around 200 BCE in Shen Nong Ben Cao Jing, an ancient book detailing the medicinal and agricultural knowledge of the mythical Chinese emperor Shen Nong. Regarded as the oldest book on Chinese herbs, the Shen Nong Ben Cao Jing records 365 traditional herbs that are classified into three grades – top, middle and low. Goji berry is one of the 120 herbs belonging to the top grade, which means it has remarkable health benefits and is harmless to humans.

Long-term use of wolfberry was advised in the Shen Nong Ben Cao Jing for:

Another classic TCM treatise, the Compendium of Materia Medica, is a collection of books by Li Shi-Zhen from the sixteenth century that is used as a primary herbal medicine reference text in many modern TCM graduate training programs. The Materia Medica is considered the first pharmacopoeia in the world and the most important one ever written on TCM. Inside, the morphological identification, health benefits, indications, and relevant prescriptions of goji berry are detailed. According to TCM theory and practice, wolfberry influences both the liver and kidney channels and nourishes these organ systems.

Today, acupuncturists and TCM practitioners commonly use wolfberry for patients with a liver disharmony who exhibit indications of a liver fluid deficiency and/or liver blood deficiency. These deficient patterns are common in individuals who are battling a chronic liver condition where symptoms of dryness and fatigue are prominent. In addition to being a key ingredient in many types of tonification formulas, wolfberry is also suggested as a food for supporting vitality.

These little orange-red berries are nutritional powerhouses. Because it is a delicate fruit, goji berry does not withstand shipping well. Thus, it is typically found in dried form or as a juice.

In addition to being used for anti-aging, heart health, improving vision, boosting the immune system and cancer prevention, wolfberry has a specific benefit for your liver. As published in the July 2010 edition of Journal of Ethnopharmacology, researchers discovered that wolfberry juice helps protect your liver from oxidation. In this tissue culture study, liver cells exposed to toxins and then treated with wolfberry extract showed fewer free radicals – molecules that cause cell damage.

Although wolfberry extract or herbal formulations require a knowledgeable practitioner’s oversight, consuming the dried fruit can be done autonomously. For general health and wellness, New York University’s Langone Medical Center recommends including 3 to 4 tablespoons of wolfberry in your daily diet.

Four suggestions on its use are similar to eating raisins:

The health benefits of wolfberry are well known in Chinese culture and, as such, it is not surprising for Chinese people to keep them stocked in their pantry. However, those of any race or culture can enjoy wolfberries. Because they are a potent mixture of antioxidants that protects liver cells, consuming these sweet, brightly colored, dried berries is an ancient Chinese secret for supporting your liver.