People with liver disease are likely to have some digestion issues, often resulting in excessive gas. Nobody welcomes gas in their stomach and intestines, especially when it is expelled as flatulence. Easy for anyone to incorporate, these five suggestions can help a person reduce their quantity of gastrointestinal gas. 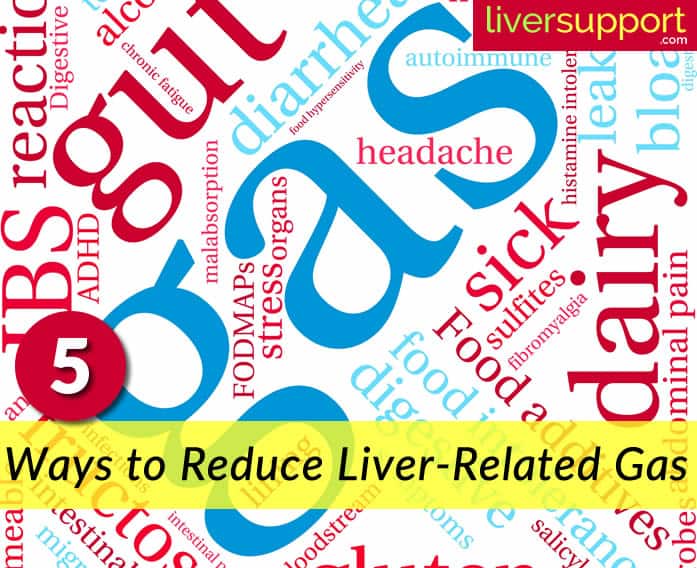 Intestinal gas is a fact of life. Despite being considered socially inappropriate, flatulence is a normal, physiological release of intestinal gas. However, excessive gas production in the abdomen can stem from liver disease and can be problematic. As long as other serious health contributors have been ruled out, there are some simple steps anyone can take to reduce gas accumulation in the abdomen and intestines.

The uncomfortable sensation of pressure inside the belly is commonly known as abdominal bloating. Abdominal distention occurs when the pressure is so extreme that the physical size of the belly protrudes.

In general, there are three reasons for distention: fluid, tissue or air accumulation in the abdomen.

Although most people are unaware that they are doing so, the most common reasons for swallowing large amounts of air include:

When air is the cause of abdominal distention, it can be relieved in various ways. Unless the air is absorbed into the blood or transferred down the intestines for elimination by flatulence, belching is one of the body’s outlets for trapped abdominal air.

When excessive gas is in the intestines, there can be many possible reasons. Especially pertinent to those with liver disease, malabsorption and/or maldigestion of certain nutrients can cause gas. Common in those with alcoholic liver disease and cholestatic liver diseases, such as primary biliary cholangitis, not being able to absorb or break down certain foods causes gas and limits the nutrition extracted from food. In theses instances, playing close attention to and then avoiding the foods responsible can reduce potentially flatulent situations.

When foods are not absorbed or broken down well by the stomach or small intestine, bacteria in the large intestine must go to work. The bacteria in the intestines produce gas (hydrogen and/or methane) when they digest foods that have not been digested during passage through the small intestine. The biggest culprits of intestinal gas are sugars and starches.

While flatulence is a common way to expel gas, there are two other ways in which gas can escape the intestine:

Although reducing the amount of abdominal and intestinal gas depends on why there is excessive gas in the first place – and one big reason we learned can be from having a compromised liver – there are five simple ways to reduce gaseous pressure:

Although small amounts of gas in the abdomen or intestines is completely normal, excessive quantities can cause discomfort and embarrassment. A person with liver disease is even more prone to these issues because of a higher likelihood of having digestive problems. As long as more serious causes of gas are ruled out by a physician, you can reduce your gas by choosing what you eat and drink, being deliberate in your consumption methods, getting some physical activity and taking probiotics.

Editor’s Note:  In addition to probiotics, Digestive Enzymes can also offer digestive and gut support for those with liver concerns. Digestive Enzymes is a comprehensive enzyme formula that helps you completely digest your foods and absorb their nutrients. It is clinically proven to reduce the occurrences of bad bacteria, bloating and flatulence.