In unison with lifestyle modifications, supplementing with UltraThistle’s silybin phytosome complex greatly increases the odds in your battle against fatty liver. 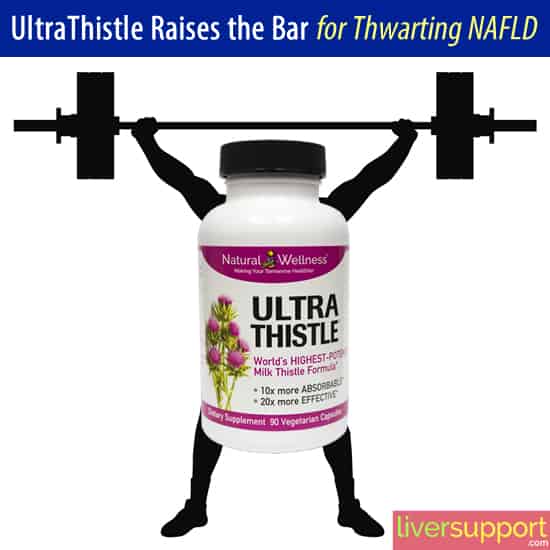 Most who have investigated liver cell protection recognize that milk thistle supports liver health. However, the milk thistle formulation contained in UltraThistle dramatically increases its therapeutic value. For the millions of Americans at risk for or already managing a fatty liver, UltraThistle is one of the most effective supplements available for maintaining an ideal liver lipid balance.

Excessive alcohol consumption is not the only way to acquire a lifestyle-induced chronic liver problem. While drinking lots of alcohol is a surefire route towards liver damage, poor dietary habits and low levels of physical activity also help set the stage for liver woes. Affecting an estimated 30% of American adults, nonalcoholic fatty liver disease (NAFLD) is the buildup of extra fat in liver cells that is not caused by alcohol. Despite the lack of medical treatment for NAFLD, certain lifestyle changes and milk thistle supplementation offer an effective strategy for preventing or even reversing fat accumulation in the liver.

In the absence of alcohol abuse and other identifiable sources of liver injury, NAFLD is characterized by liver fat accumulation exceeding 5% of your liver’s weight. Excess fat accumulation in your liver is one manifestation of metabolic syndrome, an increasingly common umbrella diagnosis that includes:

Treatment for NAFLD – and metabolic syndrome as a whole – is based on lifestyle intervention. At this point, the complexity of metabolic syndrome has prevented the development of any viable pharmaceutical solutions. Lifestyle changes for a fatty liver revolve around losing excessive weight by eating a healthy diet and getting plenty of exercise. As such, the Mediterranean diet is one of the approaches being closely examined for reversing the early stage of NAFLD, because it has shown positive clinical improvement in the areas of:

The combination of eating a Mediterranean diet and engaging in regular exercise shows great promise in reducing obesity and fat accumulation in your liver.

In addition to achieving an ideal weight with diet and exercise, liver cell protection with milk thistle appears to add another layer of support for ridding your liver of excess fat. Many published studies describe milk thistle’s value to liver health as a result of these three therapeutic properties:

Found in the seeds of the milk thistle plant, the active ingredient in milk thistle is silymarin. Silymarin is primarily composed of 6 compounds – of which silybin has been found to bestow the majority of this herb’s health benefits. Most studies show the difference between silybin and silymarin bioavailability to be around 10:1. Thus, it would require approximately 1,000 mg of milk thistle to equal the health benefits found in that of 100 mg of silybin.

As noted in a January 2017 edition of the Swiss journal Molecules, researchers discovered that silymarin and silybin inhibit the progression of non-alcoholic fatty liver disease in several ways.

In a 2012 edition of the journal Free Radical Biology and Medicine, researchers evaluated a silybin phytosome formula in a phase III, double-blind clinical trial on patients with NAFLD. The researchers found that treatment with the silybin phytosome formula for one year was associated with improvement in liver enzymes, insulin resistance and liver histology – all without increases in body weight.

A silybin phytosome complex is the most bioavailable and easily absorbed form of milk thistle. Because UltraThistle consists of a high potency silybin phytosome, it is one of the most effective supplements for preventing or reversing fat accumulation in your liver. When combined with eating a healthy diet (such as the Mediterranean diet) and exercising regularly, UltraThistle increases your chance of minimizing liver inflammation, reducing insulin resistance, thwarting liver fat accumulation and boosting your liver’s metabolic function. Finding all of these actions in a supplement that is not a pharmaceutical is a bit of a miracle – and could help change the prognostic approach for NAFLD.