It’s official. Spending too much of your day seated leads to liver fat accumulation. 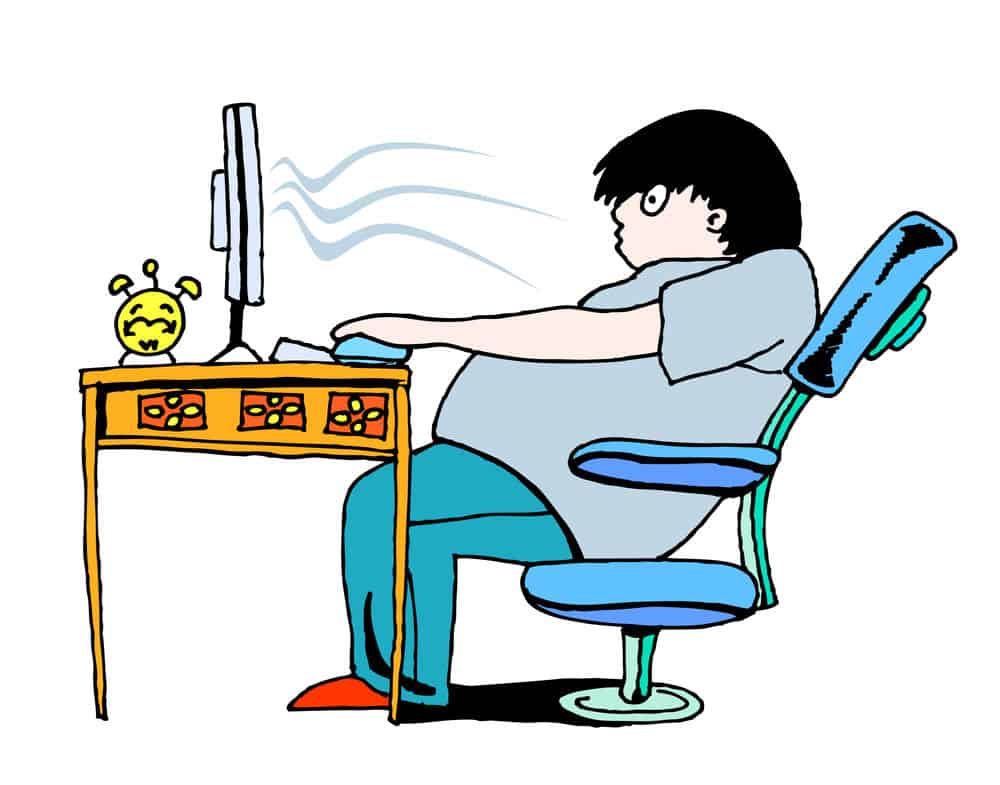 Being predominantly sedentary is unhealthy. Nobody has ever refuted this assertion. Nonetheless, modern society revolves around sitting. Because new evidence relates sitting too much with fatty liver disease risk, the dangers of inactivity are even more apparent.

Diet and exercise are frequently touted as essential components to maintaining an ideal weight and fending off disease. Despite acknowledging this as fact, many people live the antithesis of these lifestyle choices. The array of convenient, tasty and inexpensive foods contributes to bad diets and consequently, disease. Likewise, today’s predominant activities (working at a desk, watching television, surfing the internet, etc.) all revolve around sitting. The combination of poor food choices and inactivity fuel most types of major illnesses.

According to a survey by Ergotron, a manufacturer of digital display mounting and mobility products, approximately 86 percent of American workers sit all day for their job. Adding in the time spent sitting down at home, the average American spends about 13 hours a day on their rear ends. Based on studies compiled by Ergotron, the health effects of sitting are dismal:

Americans spend a lot of time in a sitting position. Whether driving a car, riding a bus or subway, answering phones, responding to email, working at a desk, scrolling through pages on the internet, reading, writing, filing, watching television or electronic gaming, we have evolved to sit for the majority of our waking hours. For a long time, health care workers and researchers have warned us that prolonged sitting is dangerous. More specifically, being sedentary is associated with a significantly higher risk of developing:

The accumulation of fat in the liver that is not due to drinking alcohol, NAFLD is estimated to impact between 25 and 30 percent of American adults – many of whom are unaware they have this problem. If not stopped early in the disease process, a fatty liver can progressively damage the liver. Eventually, an NAFLD-damaged liver can worsen into cirrhosis, liver cancer or liver failure. Thus, identifying how to prevent, stop and reverse fat accumulation in the liver has become crucial for preserving public health. There is currently no FDA-approved medication to treat fatty liver disease. Learn about UltraNourish™, a superfood shake with 1,950 mg of liver support nutrients, that can help reduce fat accumulation in your liver.

In a study published in a September 2015 edition of the Journal of Hepatology, Korean researchers reported that too many hours spent sitting increases the risk of developing NAFLD. Many people assume that a trip to the gym or morning run will offset their ten hours of daily sitting. However, this study casts doubt on this common belief. After studying nearly 140,000 people, researchers found that:

Although this data appears discouraging, the researchers did identify an independent effect of exercise on NAFLD risk:

The results suggest that both sitting too much and too little exercise can contribute to an unhealthy liver. Dr. Yoosoo Chang, co-author of the study, said, “Our findings suggest that both increasing participation in physical activity and reducing sitting time may be independently important in reducing the risk of NAFLD.”

The World Health Organization estimates that 95 percent of the world’s adult population is inactive, failing to meet minimum recommendations for health of 30 minutes of moderate to intense physical activity five times a week. Combine this statistic with the rise in sitting due to desk jobs, social media dominance and binge-watching streaming television, it is no surprise that NAFLD is emerging as a major health threat.

In addition to eating a healthy diet and exercising regularly, restructuring the average American’s day to interrupt periods of sitting represents our best chance of defeating NAFLD. Stopping long periods of sitting by interjecting some type of physical activity every few hours could be one the best ways to prevent fat from accumulating in the liver.

In light of this recognition, expect liver health campaigns to urge you to get out of your chair at regular intervals. Better yet, don’t wait for health educators to convince you of the dangers of long time sitting – commit now to stop being sedentary. Learn from Dr. Chang and the other Korean researchers. Break the seal between your buttocks and your favorite seat as frequently as possible to reduce your risk of fatty liver disease.

http://www.washingtonpost.com/news/wonkblog/wp/2015/06/02/medical-researchers-have-figured-out-how-much-time-is-okay-to-spend-sitting-each-day/, Health experts have figured out how much time you should sit each day, Brigid Shulte, Retrieved September 20, 2015, The Washington Post, 2015.