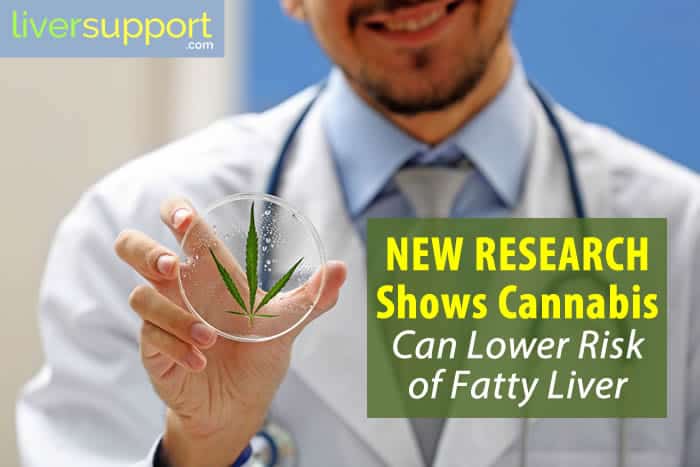 Non-alcoholic fatty liver disease (NAFLD) is an increasingly common illness that currently has no known cure. Although lifestyle modifications can reverse NAFLD if instituted early enough, new research reveals a shocker by hinting that a marijuana habit might be beneficial.

Although it is normal for your liver to have some fat, non-alcoholic fatty liver disease (NAFLD) is the buildup of excessive fat in your liver – that is not caused by alcohol. When 10% or more of your liver is fat, you have a fatty liver.

Although some demonstrate no risk factors at all, those most at risk for NAFLD:

A fatty liver by itself is not necessarily dangerous, but it can be – because greater amounts of liver fat cause inflammation and liver cell damage. Thus, NAFLD can progress to liver fibrosis, cirrhosis, liver cancer, and liver failure.

NAFLD is estimated to affect nearly one in three American adults. While there are no medical treatments currently available for a fatty liver, eating a healthy diet and exercising regularly can help prevent liver damage and may even reverse NAFLD in its earliest stage.

With the average American growing in girth, incidences of fatty liver disease continue to rise. As such, the medical community is always searching for the magic substance to prevent liver fat accumulation.

Cannabis and the Endocannabinoid System

Cannabis (marijuana) is one of the oldest psychoactive substances used by humans. Globally, cannabis is the most abused substance – despite it being illegal in most countries.

Cannabis use has been associated with an increased prevalence of:

However, cannabis use has also been linked to a REDUCTION in:

Nonetheless, we are still learning about the health risks and potential benefits of cannabis. As such, scientists have been trying to understand how cannabis affects the body. Cannabis can get people high, but it also has therapeutic properties. THC, or tetrahydrocannabinol, is the chemical responsible for most of marijuana’s psychological effects. According to the National Institute on Drug Abuse, THC acts much like the endocannabinoids made naturally by your body. The endocannabinoid system is our biological system that interacts with marijuana’s active ingredients.

Scientists have discovered the following about the endocannabinoid system:

New Research on Cannabis and NAFLD

Spurred by the evidence that the endocannabinoid system affects your liver and that cannabis use is linked to lower rates of obesity and diabetes (major risk factors for NAFLD), researchers from the University of Massachusetts Medical School examined the role of marijuana use in fatty liver disease. This was the first study of its kind and was published in the April 2017 edition of the medical journal PLOS ONE.

In their study, University of Massachusetts researchers searched through the data of nearly six million patients from 3,000 hospitals.

This study is far from perfect, but it is the first to demonstrate a statistically significant role for cannabis in fatty liver development. One of the issues with this study is that many people could have hidden their cannabis use from their doctors because it may not be legal. In addition, there was no way to discern between types of marijuana, its concentration, or mode of delivery. Nonetheless, the University of Massachusetts study has opened our eyes to the potential liver benefit of cannabis – or other substances that bind to endocannabinoid receptors.

The research accumulating on how the endocannabinoid system influences our health is just getting started, and it is strengthening support for medical marijuana use. Despite the excitement of marijuana enthusiasts, health detriments relating to cannabis use remain. Putting recreational use aside, recognizing cannabis as a means to thwart excessive fat accumulation in your liver could lead to novel therapeutic drugs to treat NAFLD. From another perspective, preventing or reversing fatty liver disease could become an additional condition for medical marijuana approval. At this point, there is not enough information to make an informed decision – but we all will be closely watching how the science of cannabis for fatty liver evolves.

Editor’s Note: Clinical LiverSupport can help reduce the accumulation of fat in your liver. Learn more!

https://www.leafly.com/news/science-tech/what-is-the-endocannabinoid-system, What is the Endocannibinoid System and What Is Its Role?, Nick Jickomes, Retrieved October 1, 2017, Leafly, 2017.