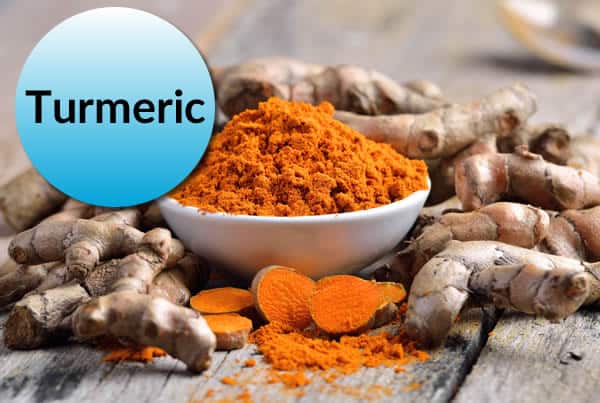 Turmeric, Curcuma longa, is a plant closely related to ginger that is native to South Asia. Like ginger, turmeric’s root contains the majority of its healthful properties. This root has been used for thousands of years as a prized ingredient both in cooking and as an herbal medicine. If you cut into the turmeric root, a bright yellow-orange color will be revealed.

A spice used in many Asian, Indian, Middle Eastern and North African dishes, turmeric is an ingredient in most curries and mustards. Imparting a vibrant yellow-orange color to anything it touches, turmeric’s taste profile is unique, featuring a combination of peppery, warm and bitter flavors. In addition, turmeric’s aroma is typically regarded as sweet and pleasant with a likening to orange zest and ginger. After being harvested, turmeric root is boiled, dried and ground into a bright yellow powder.

Turmeric is loaded with valuable vitamins, minerals and beneficial antioxidants, such as:

Considering all of these valuable ingredients, it is no surprise that turmeric has been a staple in the Traditional Chinese and Ayuverdic herbal traditions for centuries. In the past couple of decades, turmeric has also secured a prominent role in Western herbalism. The research conducted on turmeric root extract is so conclusive for an array of health conditions that many Western medical practitioners have started advising their patients to supplement with turmeric. 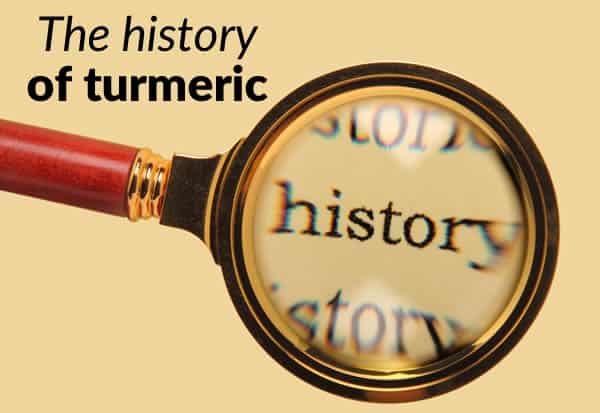 Turmeric’s use as a medicinal herb dates back nearly 4,000 years to the Vedic culture in India, where it was used as a culinary spice and had some religious significance. Turmeric had been ingested for stomach, intestine and rheumatic pain, wound healing, relieving gas, expelling worms, regulating menstruation, dissolving gallstones, stopping jaundice and purifying the blood. Scholars believe that turmeric likely reached:

References and research into turmeric have appeared throughout history:

Modern medicine has increasingly recognized turmeric’s value to human health, as indicated by over 3,000 publications addressing turmeric that came out within the last 25 years. 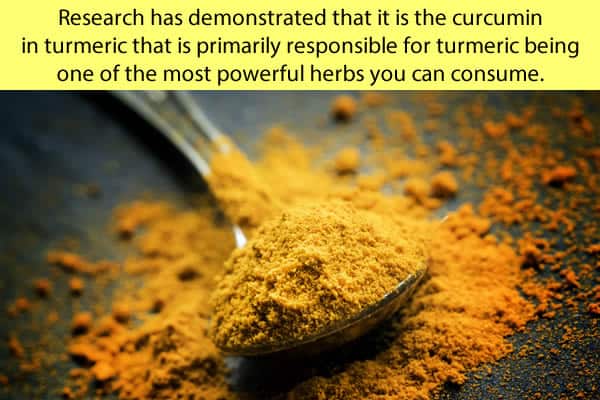 Curcumin is the substance that yields turmeric’s colorful pigmentation. In general, turmeric contains between 3% and 5% of the active ingredient curcumin. Research has demonstrated that it is the curcumin in turmeric that is primarily responsible for turmeric being one of the most powerful herbs you can consume. Of great value to our health, curcumin is known for its anti-inflammatory, bile-stimulating, anti-tumor, anti-arthritic, anti-amyloid, anti-ischemic, anti-microbial and carminative (reduces flatulence) properties.

As such, curcumin is often recommended to prevent or reduce the following 7 health issues:

As stated above and supported by decades of research, turmeric’s value to human health is wide spread and irrefutable. Turmeric is most commonly known for its ability to decrease inflammation throughout the body which protects against so many serious health conditions. However the research has also proven that turmeric supports a healthy aging process, and does so much more than reducing inflammation when protecting many different parts of the body – including nearly every aspect of your liver’s health.

Turmeric and Your Liver 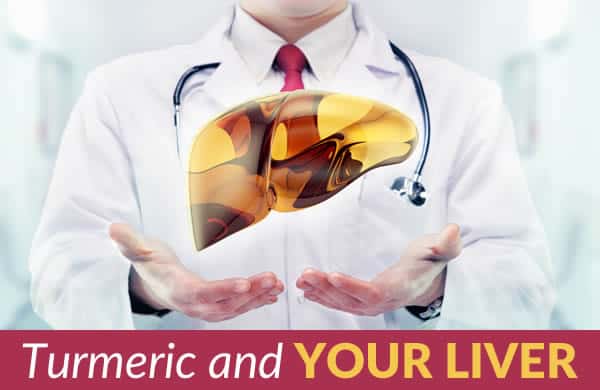 Your liver is your body’s largest glandular organ, and it performs many essential functions to maintain life. With a prominent role in detoxification, digestion, metabolism, immunity and the storage of nutrients in the body, the liver is one of your body’s most valuable components.

Although your liver performs over 500 essential functions, the five most prominent roles of your liver are:

How Turmeric Helps Your Liver

The antioxidant and anti-inflammatory properties of turmeric have a healthful impact on several of the liver functions listed above. Research on turmeric has found that supplementing with turmeric has enormous benefits for supporting healthy fat metabolism, aiding your liver in detoxification, and maintaining a favorable cholesterol balance in your blood.

Turmeric supplementation has also been shown to reduce your risk of fatty liver disease by stimulating bile and regulating the enzymes responsible for cholesterol metabolism. Since excessive fat accumulation in the liver is estimated to affect approximately one-third of all American adults and is known to accelerate the progression of any type of liver ailment, turmeric offers a simple solution for a fatty liver and prevention from possible future, more severe liver damage.

So much research has been done on turmeric and the liver. Experts and more research have shown why and how turmeric provides numerous additional ways to improve and promote your liver’s health:

The Connection Between Turmeric, Stress and Your Liver 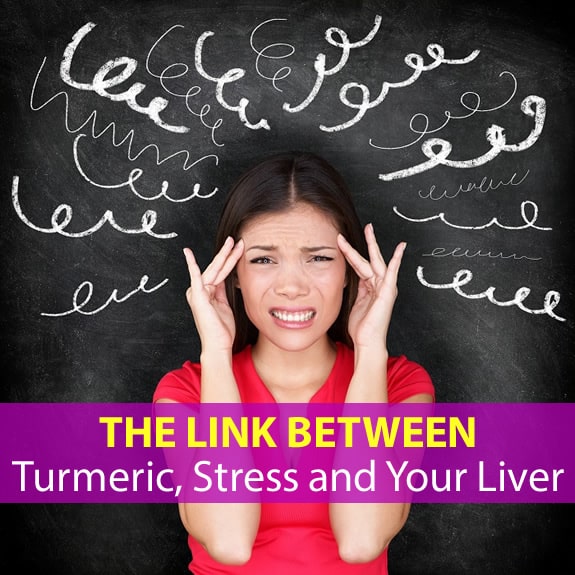 An additional liver benefit of turmeric is an unexpected bonus. We all know that the mind and body are intricately entwined, that stress has the ability to cause physical health issues such as headaches, muscle pain and fatigue.

But did you know that stress can also negatively impact your liver’s well being?

Thus, anyone with liver issues is at additional risk for more liver damage when under substantial, unrelenting stress. Researchers have found that curcumin enhances brain chemicals such as noradrenalin and serotonin, and increases the production of dopamine, helping to reduce stress levels. These chemicals that normally exist in your body are known mood elevators capable of easing stress. In addition, curcumin has been found to lower cortisol levels (cortisol is known as the stress hormone). As such, curcumin’s enhancement of your body’s natural mood elevating compounds and reduction in cortisol has an indirect, yet positive effect on your liver via stress reduction.

So, on the whole, turmeric is a highly valuable herb to supplement with to maintain or improve your liver health. Turmeric’s antioxidant and anti-inflammatory properties, its ability to improve several key and essential liver function, such as detoxification and fat metabolism, its ability to protect liver cells from damage, reduce fat accumulation, improve fat metabolism and shield your liver from the effects of stress make it a supplement that should be made a part of everyone’s dietary plan.

How to Choose the Best Turmeric for Your Health Needs

Considering it’s a common spice that might already be lingering in your kitchen pantry, what is the best turmeric for your liver’s health? Adding turmeric to your stir-fry is a step in the right direction, but sprinkling some of this yellow-pigmented spice on your veggies is likely not enough to improve the health of your liver. That’s because an awful lot of turmeric is needed to yield a therapeutic dose of curcumin, the component of turmeric primarily responsible for all its health benefits. Because of curcumin’s potential to reduce liver inflammation, support optimal liver function and improve the liver’s fat metabolism, many consider taking a turmeric supplement to benefit from its therapeutic properties.

The most potent and powerful turmeric supplement available contains a 95% concentration of curcuminoids. This is what you should look for. As for quantity, although different sources assign differing quantities of curcumin to achieve therapeutic value, most agree that a threshold of effectiveness is crossed once you take 500 mg of curcumin a day.

Bioavailability – How Well Is Curcumin Absorbed By Your Body

Curcumin, while being a potent antioxidant and liver supportive supplement, has poor oral bioavailability. This means that a low percentage of what is consumed is actually absorbed into your bloodstream and able to reach its target in your liver. Unfortunately, the curcuminoids are excreted as waste before they are able to impact your body.

Since neither turmeric nor curcumin easily enters your bloodstream, its bioavailability must be boosted to achieve therapeutic value. In order to help curcumionoids enter your bloodstream, it must be combined with a type of catalyst. Piperine, also referred to by its trademarked name, BioPerine, is such a catalyst. It is used as a “bioenhancement,” because it accelerates the absorption of nutrients, such as curcumin.

Piperine is an extract derived from black pepper, Piper Nigrum L, and long pepper, Piper longum L. Piperine is the component that lends peppers a spicy taste. Through research, BioPerine was shown to increase the absorption of a variety of nutrients, including curcumin.

It does this by:

All four of these BioPerine properties function to keep curcumin in your body’s cells longer. As found in a study published in Planta Med in 1998, researchers determined that combining curcumin with BioPerine can increase the absorption of curcumin by up to 2,000%! That’s 20x that of curcumin alone. 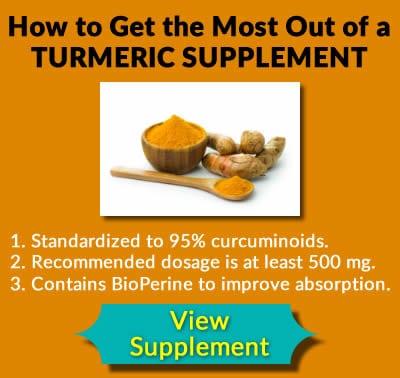 Awareness of curcumin’s value to liver wellness is growing steadily, and with that awareness is a spike in the market for turmeric supplements. Because turmeric’s star component, curcumin, is so useful for reducing liver inflammation, improving liver fat metabolism and supporting liver function, turmeric supplementation is becoming common knowledge in those with liver concerns. To get the most out of a turmeric supplement, make sure that it is standardized to 95% curcuminoids, its recommended dosage is at least 500 mg, and is paired with BioPerine.

Every conventional medication has side effects, some more severe than others. While most people believe herbs and supplements to be free of side effects because they are natural, this is not always the case.

Turmeric’s strong anti-inflammatory and antioxidant properties make it a potent ally for cardiovascular, liver, joint, immune, metabolic, neurologic and digestive health. When any substance – whether manufactured or found in nature – is as strong as turmeric, there are bound to be some cautions regarding its use. Turmeric’s therapeutic characteristics can help a great deal of people, but those same properties may cause side effects in certain individuals.

Consuming turmeric in food rarely causes any side effects, but larger dosages may. According to the National Institutes of Health, standard supplement dosing of turmeric is between 400 milligrams to 3 grams divided over the course of a day. In tea form, 1 to 1.5 grams of dried turmeric root once or twice a day is a standard dose.

Although not typically associated with any significant side effects, people with the following five conditions are most commonly vulnerable to ill effects from turmeric:

Although generally regarded as safe, turmeric may interact with certain medications. If you are currently taking any of the following medications, discuss turmeric supplementation with your healthcare provider before making any changes to your health routine:

In addition, high turmeric doses have the potential to interact with the following medications:

Just like with all substances, turmeric may cause allergic reactions. People with allergies to plants in the ginger family and those with an allergy to yellow food coloring (often derived from turmeric), are most susceptible.