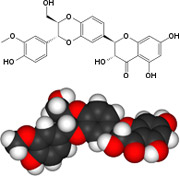 Silybin is what you need to look for in a milk thistle product. Medical researchers agree that silybin is responsible for the majority of milk thistle's liver-protective qualities.

How Much Silybin Is in Milk Thistle?

Milk thistle, the herb, is made up of both active and inactive ingredients in varying amounts. In the U.S., most milk thistle is standardized to 80% silymarin. This means, the active ingredients (collectively known as silymarin) make up 80% of the total milligrams of the product. So if you purchased a product of milk thistle 240 mg standardized to 80% silymarin, you would actually have only 192 mg of silymarin (240 mg x .80% = 192 mg).

Silymarin consists of three flavonoids (silybin, silidianin, and silicristin). Researchers agree and clinical studies show that of these three flavanoids, silybin is the most beneficial of the active ingredients and responsible for the majority of milk thistle’s liver-protective qualities. Within this silymarin mixture, silybin only makes up 50% of the active ingredients. Of the 192 mg of silymarin stated in the example above, only 96 mg are silybin (192 mg x .50% = 96 mg). So out of the original 240 mg of milk thistle, only 96 mg are silybin. This is very important to understand when you are comparing milk thistle products.